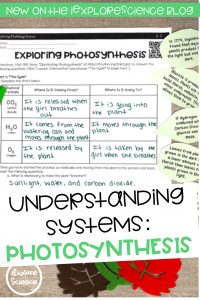 One of the NGSS Crosscutting Concepts that has so many ties across the disciplines is the idea of Systems and System Models.  At the middle and high school levels, one of our goals is to help students use models (Science and Engineering Practice!) to understand and identify the inputs, outputs, and processes involved in systems.  Identifying boundaries is another important element of working with systems and system models at the secondary science level. Lastly, tracking the flow of energy and matter within a system (another Crosscutting Concept!) can illuminate what is happening within a system.

Photosynthesis is a great way to tie these concepts together.  Photosynthesis is the process by which plants (and some other organisms) use sunlight to synthesize foods from carbon dioxide and water.  In the NGSS, MS-LS1-6, MS-LS1-7, HS-LS1-5, and HS-LS2-5 are most closely tied to these topics. When bundling the processes of photosynthesis and respiration together – perhaps combining this with a study of the atmosphere or the carbon cycle – students can use a systems approach to understand the processes.

I addressed HS-LS1-5 and HS-LS2-5 in my Earth Science class through that very lens — atmosphere and climate, focusing on the carbon cycle and later on, on its impact on climate and climate changes.

No matter what I am teaching, my goal is for students to always discover the content themselves.  While there are so many hands-on labs students can use to investigate photosynthesis and respiration, I was limited on time and resources at this point in the year. And honestly, photosynthesis wasn’t really my focus. Remember, this was an atmosphere and climate unit — photosynthesis and respiration were kind of “side notes” to help students understand the work of the carbon cycle. I wanted to introduce the process but not spend a ton of time diving into it.  So I needed an activity that I could quickly introduce photosynthesis, knowing students would go much deeper into it again in their biology classes the following year anyway.

As it turned out, the activity I settled on ended up being a great way to review the Crosscutting Concept of Systems and System Models.  So what did I do?

I know you are probably sick of me talking about card sorts… but I did a card sort. This one was a little different though, so don’t tune out yet! Instead of pictures or examples, students sorted evidence to identify the inputs (or as I introduced, “what goes in”) and the outputs (“what comes out”) of this process we were learning about.  I admit, I think I did give them the term photosynthesis at the beginning of the activity. I could have potentially left it out, but at the same time, I don’t think it matters that much. I did refrain from telling them what photosynthesis was, though. Their job was to figure it out. (Granted, a few remembered from previous science classes.)

I divided my students into groups for this task, and I gave each group a set of “leaf clues” that noted some important discoveries scientists have made along the way that connect to the process of photosynthesis. You can see some examples below. 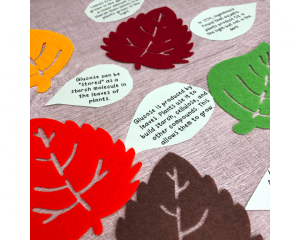 Students were tasked with identifying connections between the cards and ultimately sorting the clues into “the ins” and “the outs.”  They then recorded their ideas – and some notes about the clues – on a very simple graphic organizer. Honestly, this was pretty much the extent of the activity. It was exactly what I wanted – simple, quick, and a way to get them thinking about inputs and outputs.

(Oh, there were some pretty hefty vocabulary words included in a few of the clues, so I provided students a glossary of a few of the terms and also asked them to identify some terms or ideas that confused them.  We were able to clarify these concepts during our discussion.)

The debrief and follow-up is where more of the heavy lifting comes in.  I always start by asking students about their ideas — what did they observe? Did they see terms or ideas coming up again and again? What words helped them understand which category to put a clue into? Before even diving into the ins and outs, what are just the different components involved?  My goal is to always use my students’ responses and observations to build from during our discussions and any follow-up “lecture bursts.” (PS – That is what the Explain phase of the 5E Model should really look like!) 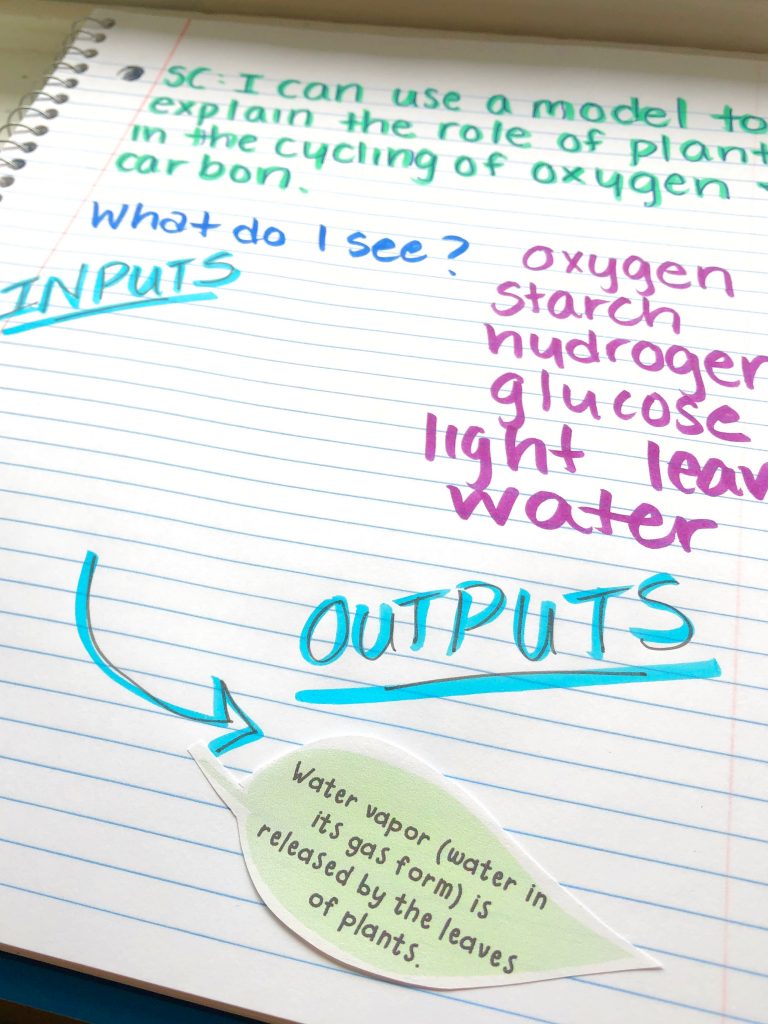 After breaking down the “leaf clues,” students move into an online interactive from PBS.  This very simple activity – you can check it out here – reinforces their understanding of the inputs and outputs and then reviews photosynthesis as a whole. While it does provide the official chemical reaction, I don’t focus on the formula portion. Again, my focus is on the big idea (and much less on the details) for this particular topic in my Atmosphere and Climate unit.

So where does the Systems and System Models focus come in? Right here at the beginning of the interactive. 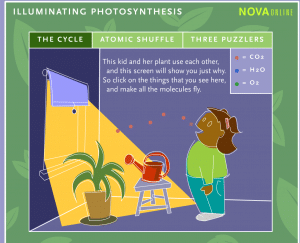 This is a perfect example of a super simple system.  First in partners or small groups, and then at large as a class, we identify those inputs and outputs we had introduced earlier.  We also talk about system boundaries. In some ways, the room is a boundary. But does that change if the door opens? In the short term, is this system self-sustaining? What about the long term? What might happen if the girl left the room? What if the girl left the room, and the room remained sealed? (You can get into some very interesting ideas here, especially if students have some background knowledge of ecosystem science — decomposers and all.)

While I never spent much more time on photosynthesis beyond these few activities in my unit, for those of you really focusing on the concept, this would be a perfect opportunity to tie in a hands-on lab to test student ideas about the system.  You could engage your students in Designing and Carrying Out Investigations while reinforcing both the Crosscutting Concepts of Systems and System Models and the additional practice of Developing and Using Models.  Moreover, students would be reviewing and applying their understanding of Core Disciplinary Ideas related to photosynthesis and respiration – and potentially ties to the cycling of matter and energy. Wow! That’s a lot of connection — which is what you want to aim for! 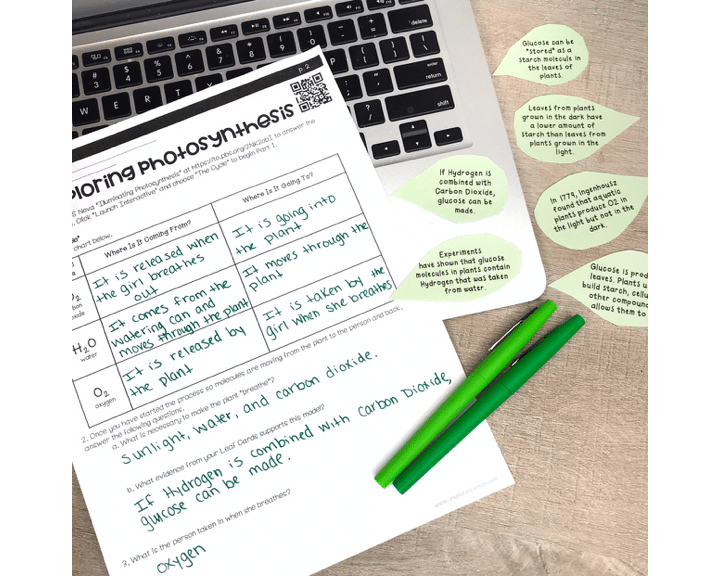 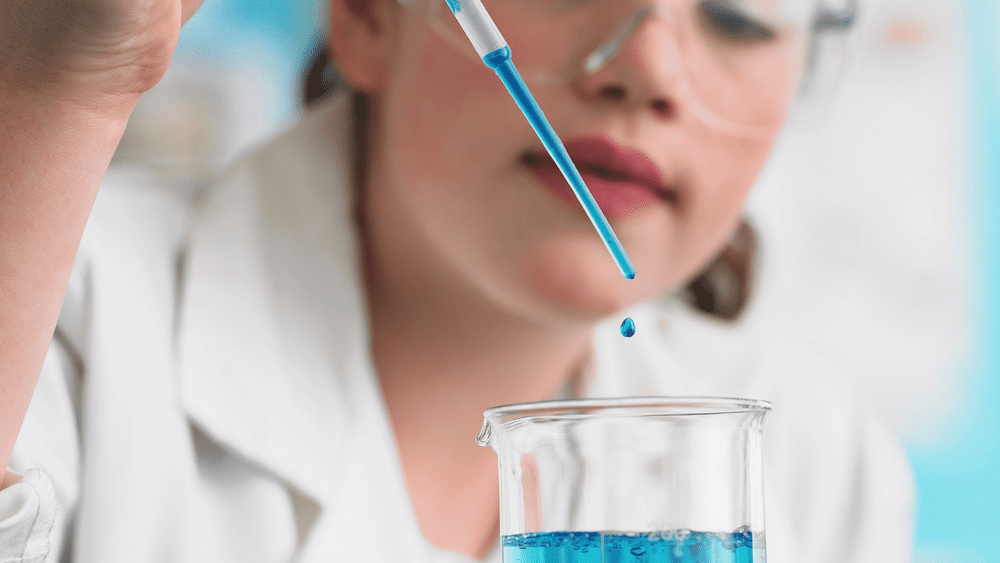 Tools To Support Engaging In Argument From Evidence